skip to main | skip to sidebar

Labels: back to basic

Posted by aisamuddinMH at 8:50 AM 6 comments:

taken from a friend's blog http://blogshmlogue.blogspot.com/


Between the Israeli assault on Lebanon and the Zionist “war on terror,” the Muslim world is now center stage in every American home. I see the carnage, death and destruction that have befallen Lebanon, but I also see something else: I see you. I can’t help but notice that almost every woman I see is carrying a baby or has children around her. I see that though they are dressed modestly, their beauty still shines through. But it’s not just outer beauty that I notice. I also notice that I feel something strange inside me: I feel envy. I feel terrible for the horrible experiences and war crimes that the Lebanese people have suffered, being targeted by our common enemy. But I can’t help but admire your strength, your beauty, your modesty, and most of all, your happiness.

Yes, it’s strange, but it occurred to me that even under constant bombardment, you still seemed happier than we are, because you were still living the natural lives of women. The way women have always lived since the beginning of time. It used to be that way in the West until the 1960s, when we were bombarded by the same enemy. Only we were not bombarded with actual munitions, but with subtle trickery and moral corruption.

They bombarded us Americans from Hollywood, instead of from fighter jets or with our own American-made tanks. They would like to bomb you in this way too, after they’ve finished bombing the infrastructure of your countries. I do not want this to happen to you. You will feel degraded, just like we do. You can avoid this kind of bombing if you will kindly listen to those of us who have already suffered serious casualties from their evil influence. Because everything you see coming out of Hollywood is a pack of lies, a distortion of reality, smoke and mirrors. They present casual sex as harmless recreation because they aim to destroy the moral fabric of the societies into which they beam their poisonous programming. I beg you not to drink their poison. There is no antidote for it once you have consumed it. You may recover partially, but you will never be the same. Better to avoid the poison altogether than to try to heal from the damage it causes.

They will try to tempt you with their titillating movies and music videos, falsely portraying us American women as happy and satisfied, proud of dressing like prostitutes, and content without families. Most of us are not happy, trust me. Millions of us are on anti-depressant medication, hate our jobs, and cry at night over the men who told us they loved us, then greedily used us and walked away. They would like to destroy your families and convince you to have fewer children. They do this by presenting marriage as a form of slavery, motherhood as a curse, and being modest and pure as old-fashioned. They want you to cheapen yourself and lose your faith. They are like the Serpent tempting Eve with the apple. Don’t bite.

I see you as precious gems, pure gold, or the “pearl of great value” spoken of in the Bible (Matthew 13: 45). All women are pearls of great value, but some of us have been deceived into doubting the value of our purity. Jesus said: “Give not that which is holy unto the dogs, neither cast your pearls before swine, lest they trample them under their feet, and turn again and rend you” (Matthew 7: 6). Our pearls are priceless, but they convince us that they’re cheap. But trust me; there is no substitute for being able to look in the mirror and seeing purity, innocence and self-respect staring back at you.

The fashions coming out of the Western sewer are designed to make you believe that your most valuable asset is your sexuality. But your beautiful dresses and veils are actually sexier than any Western fashion, because they cloak you in mystery and show self-respect and confidence. A woman’s sexuality should be guarded from unworthy eyes, since it should be your gift to the man who loves and respects you enough to marry you. And since your men are still manly warriors, they deserve no less than your best. Our men don’t even want purity anymore. They don’t recognize the pearl of great value, opting for the flashy rhinestone instead. Only to leave her too!

Your most valuable assets are your inner beauty, your innocence, and everything that makes you who you are. But I notice that some Muslim women push the limit and try to be as Western as possible, even while wearing a veil (with some of their hair showing). Why imitate women who already regret, or will soon regret, their lost virtue? There is no compensation for that loss. You are flawless diamonds. Don’t let them trick you into becoming rhinestones. Because everything you see in the fashion magazines and on Western television is a lie. It is Satan’s trap. It is fool’s gold.

I’ll let you in on a little secret, just in case you’re curious: pre-marital sex is not even that great. We gave our bodies to the men we were in love with, believing that that was the way to make them love us and want to marry us, just as we had seen on television growing up. But without the security of marriage and the sure knowledge that he will always stay with us, it’s not even enjoyable! That’s the irony. It was just a waste. It leaves you in tears.

Speaking as one woman to another, I believe that you understand that already. Because only a woman can truly understand what’s in another woman’s heart. We really are all alike. Our race, religion or nationalities do not matter. A woman’s heart is the same everywhere. We love. That’s what we do best. We nurture our families and give comfort and strength to the men we love. But we American women have been fooled into believing that we are happiest having careers, our own homes in which to live alone, and freedom to give our love away to whomever we choose. That is not freedom. And that is not love.

Only in the safe haven of marriage can a woman’s body and heart be safe to love. Don’t settle for anything less. It’s not worth it. You won’t even like it and you’ll like yourself even less afterwards. Then he’ll leave you.

Sin never pays. It always cheats you. Even though I have reclaimed my honor, there’s still no substitute for having never been dishonored in the first place. We Western women have been brainwashed into thinking that you Muslim women are oppressed. But truly, we are the ones who are oppressed; slaves to fashions that degrade us, obsessed with our weight, begging for love from men who do not want to grow up. Deep down inside, we know that we have been cheated.

We secretly admire and envy you, although some of us will not admit it. Please do not look down on us or think that we like things the way they are. It’s not our fault. Most of us did not have fathers to protect us when we were young because our families have been destroyed. You know who is behind this plot. Don’t be fooled, my sisters. Don’t let them get you too. Stay innocent and pure. We Christian women need to see what life is really supposed to be like for women. We need you to set the example for us, because we are lost. Hold onto your purity. Remember: you can’t put the toothpaste back in the tube. So guard your “toothpaste” carefully!

I hope you receive this advice in the spirit in which it is intended: the spirit of friendship, respect, and admiration. From your Christian sister with love
Posted by aisamuddinMH at 10:49 PM 5 comments:

I got this from a friend.READ PLEASE!

I am Shinah, a self-initiated and self--apponted reasearcher in global politics and the HIDDEN GLOBAL AGENDA of today's economics and geo-political events.

1. If one follows closely the speeches made by Anwar overseas as an advocator of "Islam Liberal' or "Islam Moderate', and his unusually close liaison and consultations with the 'hidden hands' (Tun M. calls it "They" ) in Washington, one would NOT at all be surprised with the 'current waves' happening in PAS and Perak for that matter.

It is not a conincidence that Anwar works hand in hand with NED, and financially supported (generously) by NED. To name a few.

3. (Only the MOSSAD-style "false-flag' mode is not seen yet)

5. Read also "The WORLD CONQUEST: Through World Jewish Government', translated by Victor E. Marsden. (Protocols of the Meetings of the Elders of ZION). (219 pages)...surely you can read this one!)

6. okay, if you REALLY don't want to read and get facts, then Watch the documentary (you-tube I have sent earlier) about ROTHSCHILD. The elder Rothschild once said: 'Let me control the nation's money, I care not how it is run....."

7. Chaos..petty bickerings, lawyers fighting one another., colour T-shirts, riots, street demonstrations, hiring "gansters" to create street demos, "rent- a mob".., ....one purpose..to get the nation LOST in the woods, and fail to see the BIG picture, and too busy to build the nation. Typical classic CIA-style methodology. THanks, Anwar. My children will remember you in a "nice" way.

Yes, in line, indeed with the centuries-old "advice" of the Elders o f ZION. Anwar fell for it. But then, Rewards are tied to dancing to their tune, of course. Who cares if future Malaysian generations (yes your children and grandchildren no longer enjoy the peace and wealth of the nation's vast resources).


9. Yes, ...the CIA-NED- Washington strategy, mediated and executed via their "local" puppets..............DIVID
E the Malays (like they have never been divided before in history), divide their votes (create PKR), stir up inter-racial conflicts, create issues out of nowhere, create and confabulate stories(and repeat the story over and over...CNN, MSN-BC-, New-York Times-style) to demonise the leaders of the nation (that they want to take over), based on hearsay, falsehood and 'doctored' photos (yes, I AM talking about Altantuya issue, and I had seen the ludicrous 'doctored' photos.).

You can certainly share my opinons with others. Thanks for reading.
-NSHINAH-

As I have thought all along. THIS gives some justifications and answers to prove it!
Posted by aisamuddinMH at 9:15 PM 4 comments: 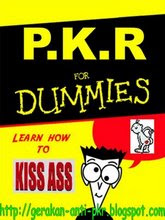